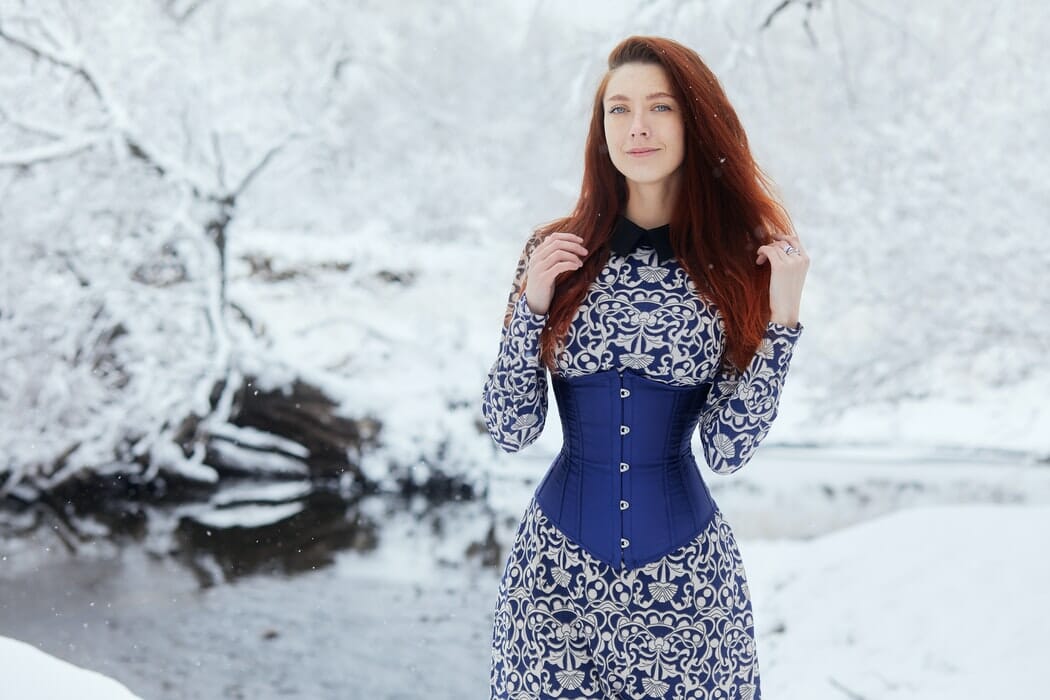 Corsets are as crucial to many women these days as they were eons ago, especially if they seek the same hourglass shape that women of earlier centuries had.

They are an essential part of the wardrobe and may be viewed today as designer items worn with snug jeans and sometimes jackets.

These are undergarments made with sturdy material that is worn to retain and guide the torso into the particular shape that you desire.

It is traditionally a tinier waistline or bigger bottom that many women aim for aesthetic appeal. In contrast, for others, it might be medical reasons or to assist their bosom.

Keep in mind, though, that corsets are unisex, but a more vital part of women’s apparel

When wearing a corset as part of daily training for several hours per day, one that properly fits will offer a reduction around your waist area, which can also lead to heightened warmth and sweating. It also maintains a more upright posture for you.

You are not supposed to feel pain when you wear a corset; therefore, if you do, something is off as they should always have a snug fit and help your posture, but no pain.

Here’s an in-depth look at ten different types of corsets and their purposes.

This type of corset brings you back many centuries. It is the most typical corset style, the original Victorian corset, with a very tiny waist.

The hourglass corset provides you a fantastic hourglass shape. In this garment, the low ribs are not constrained—only a tucked waist.

It can begin from just above the bust, have a solid neckline or a sweetheart design under the chest or mid bust.

When it comes to comfort, the flexibility of fitting, and overall waist contraction, it is an ideal and robust corset choice.

But it’s not a particularly attractive silhouette as the top of the body or the hip region is not as compact as the waist compared to the corset norms.

A waspie is a form of a corset but shorter than an underbust. A waspie sits around your torso, basically a vast belt, to draw our waist in.

Waspies are often known to be waist trainers and minimize the waist size, and they may be utilized to deliver more permanent results.

They are usually worn under clothes but can also be worn over skirts, blouses, and tops as a fashion item.

This corset style is intended to create two tiny waists by dramatically squeezing the waist, making it appear as though the body is being split in two.

So-called because with the segmented body, you look like a wasp. Ultimately, in the rib cage and abdomen areas, the wasp corset produces somewhat of a strain.

The effect created by this style of corset is a body with the chest protruding and the hips pushed backward, making the torso into an S form.

This corset has a restrictive busk at the front and supporting steels instead of the inward curving Bush that was once trendy and resulted in this curved form.

This is a corset technique discovered to be more comfortable for the body than any other category when it first came about because it benefited the abdomen.

However, it proved to be more restrictive than other types of corsets. It is capable of reducing the waist by up to three inches. The shape is, however, slightly unnatural.

This corset is also referred to as the Straight Front Corset, and the contour it creates is called the S curve, the kangaroo shape, and the Gibson shape.

For a more modern look or feel, the ribbon corset would be a great choice. This corset is composed of very light fabrics to enjoy for every wear.

It is effortless to wear and not as tight-fcitting as others which makes it suitable for people who want a little shaping but nothing extreme. You might call it the ontemporary corset.

If you want something that doesn’t just contour the waist and lifts the bosom but would like your hip to be shaped a bit as well, then the Corselette is just right.

In the conventional understanding, the name implies that the corset continues to the hip and is pretty long compared to the general corset.

It may look like a broad belt, but really, it is a short corset that will encircle the waist region only. It almost looks like a wide belt.

When you compare it with other corsets, it will only give you a small waist condensing look, but if that’s what your aim is, then you’re spot on.

7. Lace Front and Back

This one has always been beautiful from centuries ago and even today.

The appearance of lacing is the basis of this classification.

Sometimes the front alone or both the front and back will be laced. You can even find some laced at the front, rear and sides, referred to as triple lacing. Of course, to make it easier to put on, it’s best to loosen only one section.

The most classic corset style is overbust, and basically what you might think of when asked to imagine a corset. This design covers the bust and finishes just above the hips in general. Overbust corsets raise the bust while reducing the waistline as well, also providing back support.

Overbusts may be worn alone, underclothing, or over clothing, probably the most versatile corset type. To build a desirable hourglass figure, you might consider wearing this style alone with a pair of skinny jeans or tailored leather trousers for a night out or under a dress.

Overbusts come in several types, with many built for display. We’ve seen many lovely corset tops that can be donned with a top and styled with any bottom you choose. They all look great!

First up is the sub-bust — for this one, the hint is in the name. An underbust corset is situated just below the bust and therefore does not have breast support. Underbust are often worn as protective undergarments and to minimize waist size, but as a fashion statement, they mayalso be worn on top of clothes.

With your underbust corset, you will need to wear a decent supportive bra. Usually, this style offers a substantial waist reduction to achieve an hourglass, and it can also assist with your stance and provide back support.

This style’s main benefit is how versatile it is — you could invest in a simple plain underbust corset and wear it over and underclothing in many different ways.

The torso is condensed in the abdomen in this design, which contributes to the appearance of an incredibly long torso. Rigid boning is used to give the torso an appearance of thickness.

This type’s main drawback is a very extreme strain to the lower ribs-you should not wear this type of corset for a long time. To fit into this kind of corset, daily waist training is required.

This is the signature corset popularized during the 1940s and 1950s by the French fashion designer Christian Dior.

It incorporates a single dress with a bustier, a waist cincher, and a garter belt. They’re sometimes called Basque.

This is a waist-length corset covering the rib area and front with shoulder straps and smooth sides and has back lacing.

It produces an almost dramatically elevated bust line and can have a scalloped edge on the bottom edge.

Inside the tight corset, the bust was flattened in the front along the torso but pushed up, producing a dramatic squeezed cleavage and a torso in the form of a cone, broad-set shoulders, and vast, protruding hips.

The Victorian era from the mid-1800s to the beginning of the 20th century is when Queen Victoria reigned, and the corset was a big deal.

The corset procedure used during this period had a real, curved bustline with a traditional hourglass waist silhouette and went over the bust; a sweetheart-shaped neckline or a neckline that was quite pointed.

The bottom could be pointed in shape, too. As it twisted the ribs to compress the waistline, this was not as comfortable as the Elizabethan corset.

Now last but not least, is Edwardian which was completely different from the Victorian corset. It gave the body an S curve.

This corset design went straight across the bustline and was constructed to push the chest outward and hips backward, giving a woman’s shape as an S curve.

The Edwardian corset was trending throughout the initial part of the 20th century. Riding the hips, it came lower.

Overall, if you’re planning to purchase a corset, think about what exactly you need it for so that you will be comfortable when wearing it. Whichever you choose, you’ll always be trending because corsets are here to stay.