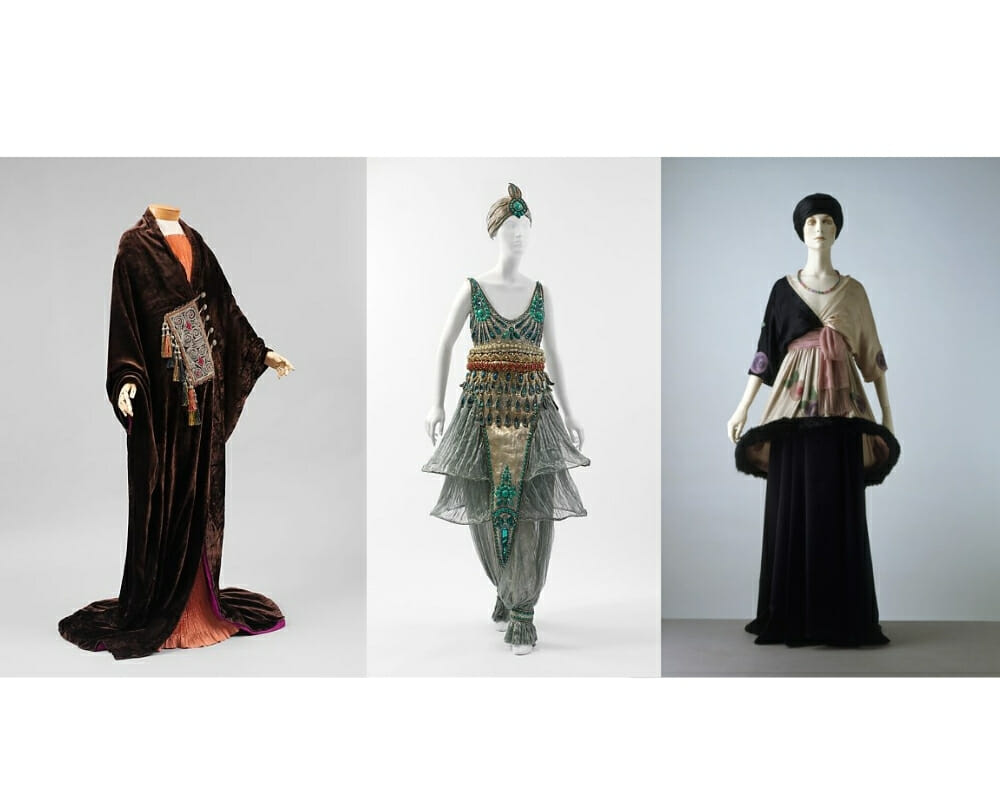 Paul Poiret was known as an eclectic designer in the early parts of the 20th century. He is often seen as a significant influencer on the way the world views fashion in modern times.

He was born in Paris in 1879 and lived much of his life in poverty, but he would ultimately become dubbed the “King of Fashion,” as detailed in his autobiography that was released in 1931.

As a son of a cloth merchant, Paul lived meagerly in a small apartment with his sisters. While his family was poor, their interest in art and fashion was evident throughout the household. He would spend much of his free time collecting antiques and constructing designs for his sisters’ dolls from leftover umbrella scraps.

At the age of 12, Paul’s family moved to Rue des Halles, but ultimately he had to be relocated to a boarding school when his sisters contracted scarlet fever. While Paul was only an average pupil, he already began to show significant interest in fashion.

He spent considerable time growing magazines or visiting local museums, theatres, and art exhibitions. When Paul graduated at the age of 18, his father sent him to an umbrella maker to learn the business.

It wouldn’t take long for Paul to grow disdain for the trade, but he would always find spare time with either drawing or sewing on wooden dolls that belonged to his sister. He was a true entrepreneur of his time.

Every successful designer indeed has a turning point that made them grow recognition. Paul’s chance came when he was convinced by a close friend to takes his designs over to Mademoiselle Choruit.

Upon meeting with her, she immediately became impressed with Paul’s work, so she bought some and later asked him to come back with more. His first conversion. Soon after he meets with Choruit, it wouldn’t be long until Paul gained other clients and make visits to other dress houses in the local area.

Paul’s started to gain more experience, and it would eventually lead to an employment offer from a known designer named Doucet in 1896, much to the disbelief of his father. Working at the Doucet studio is where Paul would become start to shine.

His first impressive design was a red cloak that would sell more than 400 copies, and customers enjoyed it so much that they asked for the same design in different color varieties. This moment would essentially lock in Paul in the world of design, and he began to make different ones on a more frequent basis. He was quite fond when he had opportunities to make costumes for theatre plays in the area.

Paul started to devote more time to his work as he worked under the direction of Doucet. During the time he worked with Doucet, more people came to appreciate and know Paul’s work.

At the same time, Paul started to have more difficulty in the relationship with his father. It was true he enjoyed making designs for different customers, but he also wanted to be independent. The strain with his father also took a toll on his working life, so it would eventually end up leaving the Doucet studio.

However, he went on good terms, and it was this time of his life where he became a household name. It was a few months after he left that Paul would then be in the next chapter of his life. He would spend a year in the army but didn’t have the opportunity to do what he loved most, which was design.

However, he was able to leave for a short period to study more on female style and grace. Soon after he had finished his service in the military, Paul came back to Paris and had another employment opportunity with Maison Worth, led by two brothers.

Here is where Paul started to make designs for a more extensive range of customers, not just the wealthy clients who lived in Paris. Again, intrigued by his desire to show become successful, he wanted to make his work available for the general public.

He would end up leaving the Maison Worth and open up his shop. During the same time, his father had passed away, but he was able to get started with some financial assistance from his mother. Almost immediately, his shop started to gain more attention for intricate displays in the windows as people walked by.

Designs Paul Poiret Was Most Famous For

It’s safe to say that Paul’s first design, the cloak, also became his mastery. As he detailed in his autobiography, “The King of Fashion,’ his cloak would start as an Asian influencer in the design world.

At the same time, Paul disliked the constrictive nature of the corset on women and thought the brassiere was much more comfortable. While he would become very well known for freeing women from corsets, he also would claim invention of the hobble skirt and harem pants.

It was Paul who is often credited with the creation of what we better know as trousers for women of the Western world.

Paul’s legacy continues in museums throughout the world. He is well-known today to have been a leader in liberating woman’s fashion. Although he struggled in the early portions of his life, he desired to make his mark in the world of fashion that would fuel his success.

He always experimented with bold designs and flashy colors, never feeling afraid to have originality. Over his time, it was also his intention to make his work appealing to the masses of women who would have otherwise thought that elegant designs were only for the rich and famous.

He was one of the most famous fashion designers of the 20th century, but he undoubtedly made a long-lasting impact. He will always carry a legacy that defied the fashion trends of his time.