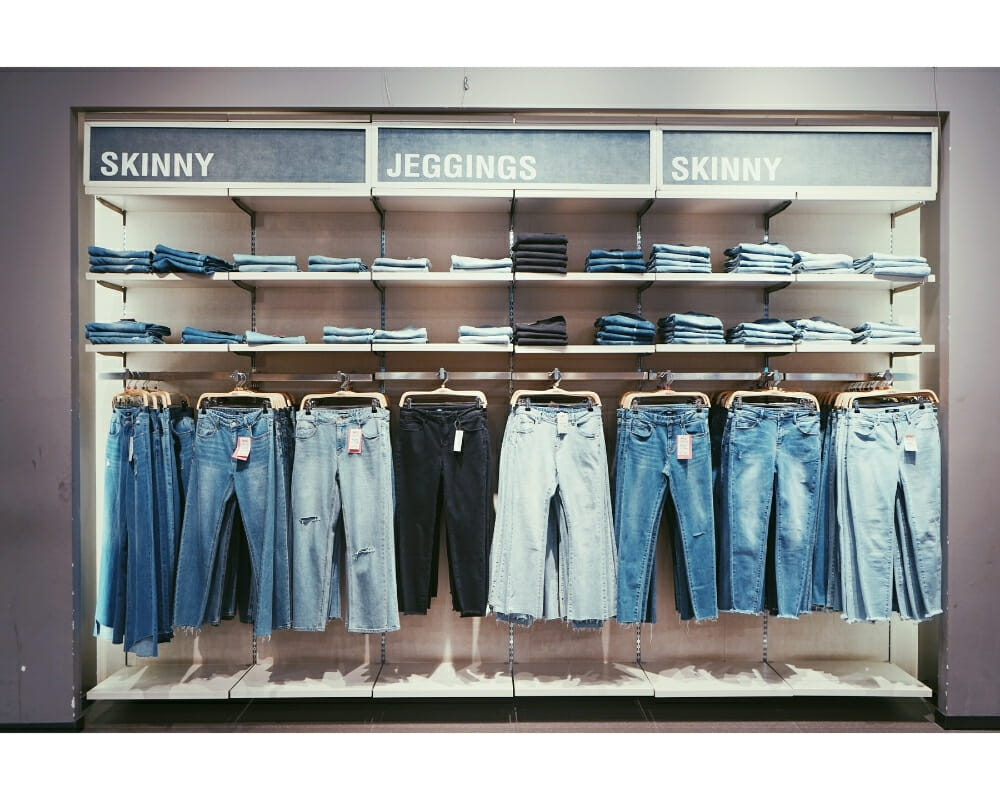 The history of jeans has taken a long winding road from the earliest Levi Strauss work clothes from the 1860s to modern day high fashion must have.

Jeans are somewhat of a universal clothing garment in that they are worn the world over by the rich and poor, men, women and children across all age groups.

Yves Saint-Laurent once stated that he wished he had invented blue jeans as jeans:

“are expressive and discreet, they have sex appeal and simplicity,-everything I could want for the clothes I design”

Levi Strauss invented jeans when he made the first pair of denim pants in the late 1860s. However the first true modern blue jeans were invented by Levi Strauss and Jacob Davis in 1873 after being awarded patent no.139,121 from the U.S. Patent and Trademark Office for the modern design that includes copper rivets at the bottom of the fly and pockets for reinforcement.

When were Jeans Invented ?

Modern blue jeans were invented in 1873 with the award of patent no.139,121 to Levi Strauss and Jacob Davis.

There had been previous heavy work pants prior to this made from denim however they did not have the copper rivets or stitched pockets that we are familiar with today.

What are Jeans Made Of ?

Jeans are made of denim which is a cotton fabric made with a twill weave. Denim was initially called serge de Nîmes as it was invented in Nîmes, France.

Below we will chart the history of jeans from their earliest days as a hard wearing work wear right through to being one of the most popular casual wear items in modern society.

From the cheapest brands offering value clothing lines to fashion designers now carrying a line of signature jeans it is safe to say that jeans are a permanent fixture in the world of fashion.

Levi Strauss immigrated from Bavaria to North America and like a lot of immigrants at the time made ends meat selling various goods as he traveled westward across the North American continent.

In the 1850s like so many others he followed the Gold Rush to California where he continued to supply miners and their families with various essentials.

The miners in need of more suitable clothing for the heavy work they were involved in asked Strauss if he could create more durable work pants that could withstand the harsh environment of gold mining.

Strauss together with a tailor made heavy duty work pants out of canvas that he was currently selling for tent making.

Later into the 1860s he started to make the same pants only now out of a fabric called denim.

Strauss took inspiration for his original Design 501 from Genoese sailors that wore a loose fitting trouser with a flared leg to allow it to fit over heavy work boots.

Although the first work pants that Strauss designed were made from heavy canvas it was not until he choose a hard wearing fabric known as Serge de Nimes(denim) did they really take off in popularity.

Denim had already gained considerable popularity in France by the time that Strauss had discovered it.

It is made from a heavy twill-woven cotton that is extremely hard wearing, and dries quickly making it a much more suitable clothing fabric than canvas.

The jeans were dyed using an artificial indigo which was considerably cheaper than real indigo. Indigo was the natural choice as it producing a nice deep dark blue color which helps to hide stains and dirt but also lasts a long time even after repeated washing.

Although the new jeans were well received they still had trouble standing up to the demands that hard manual labor such as mining in the 1870s would put on work pants.

The jeans had significant weak points namely at the corners of the pockets and the bottom of the button fly.

Miners needed jeans that could carry heavy gold nuggets in their pockets and they would often rip at the stitching at the bottom edge of the pocket.

To counter this Levi added copper rivets to reinforce any weak points in the pockets.

Rivets were then also added to the bottom of the button fly in 1873 and later that same year the back pockets received reinforced stitching in the shape of a double arc design using orange thread. On May 20, 1874, Levi Strauss and his partner, Jacob Davis, received U.S. Patent 139,121, for an “Improvement in Fastening Pocket-Openings” .

The flagship Levi Jeans Design 501 was such as success that it made Strauss a very wealthy man.

The design was so good that they did not undergo any real or significant changes over the course of several hundred years, although in the past fifty years they have become somewhat thinner offering a tighter fit.

During the 1960s Levi’s introduced the Design 505 which had a zipper fly and a regular fit, the denim was also preshrunk.

The Levi Strauss product line was heavily expanded since the late 70’s to include almost every type of jeans that have been popular over the time period.

It is can be said with absolute certainty that Levi Strauss captured the early jeans market due to inventing the product and having significant first mover advantage.

Levi jeans were popular with the working folk such as miners, lumberjacks, cowboys, ranchers, farmers, factory workers and laborers as the pants were reputed to be tough, hard-wearing, functional, comfortable and affordable.

This popularity and profit would not go unnoticed with increasing demand for hard-wearing denim pants, or jeans, resulted in two other early companies wanting to capture a share of the working-folk market, namely, the H.D. Lee Mercantile Company, established in Kansas, USA in 1898, and the Western Garment Company (GWG), founded in Edmonton, Alberta, Canada, in 1911.

The Lee Company specialized in denim work wear, and by the 1950s they had expanded into casual wear. Since then, Lee Jeans have become popular worldwide and are effectively along with Wrangler, Levi’s long standing competitor in the jeans and denim market segment.

The GWG Company originally started off by making hard-wearing clothing for the growing workforce. By the 1960s, GWG was producing casual denim clothing for the entire family. In 1963, Levis Strauss & Co. bought 75% of GWG.

Wrangler authentic western jeans appeared on the market in 1947, a brand that originated with Casey Jones who had acquired the Blue Bell Company a few years earlier. Wranglers were popular with the rodeo cowboys and cowgirls, and by 1996 one out of every five pairs of jeans sold in America featured a Wrangler label.

Originally jeans were only worn by men, however women in jeans started to become more and more common place in the 1870s predominantly on farms and ranches as it allowed women to blend in a little bit more into a mans world, plus they were also the most practical clothing choice for such working environments.

By the time the 1930s rolled around women wearing jeans purely as a fashion statement was becoming more of a common sight and Vogue magazine even ran an advert of two society women wearing tight fitting jeans which they dubbed “Western chic.”

Gradually more and more department stores began to stock blue jeans specifically for women including the cowboy boots required to complete the look.

Following WWII a side opening pant in denim was offered with women in mind, however it was not until the late 1950s that a jean was marketed that accounted for the differences between the shape of men and women and the first jeans for women were available.

Following the strict rationing of WWII and rather conservative lives of suburbia the youth of the 1950s and 1960s began to seek cultural freedom and reject the more moderate lifestyles of their parents.

The 1950s saw such youth icons as James Dean and Marlon Brando both popularize and glamorize the wearing of jeans and they became like status symbol for counter-culture youths hungry to rebel against their parents.

At countless anti-establishment, anti-war and civil rights movements and protests the youths of the 50s and 60s would almost all be dressed in jeans, gone were the more conventional shirt, tie and slacks of the early 50s.

Although popular among the young during the 1960s jeans were still considered a rarity with adults especially in more formal locations away from farms and ranches.

Slacks and shorts with dress shoes was still the norm in schools, restaurants, theaters, and at work the formal suit was still the only way to dress.

It wasn’t really until the 1980s that jeans became more mainstream and finally were found to be socially acceptable for adults to wear in less formal scenario’s.

For many they would become the new standard in casual wear and increasingly became more acceptable even in an office environment.

The big designer brands also began to take notice and the humble blue jean started to be seen on major catwalks and boutiques across the globe.

The history of jeans has taken a long and winding road from it’s humble beginning several hundred years ago as a work pant for mining and other tough outdoor jobs to becoming and everyday must have item that is in practically ever single wardrobe in the Western world.