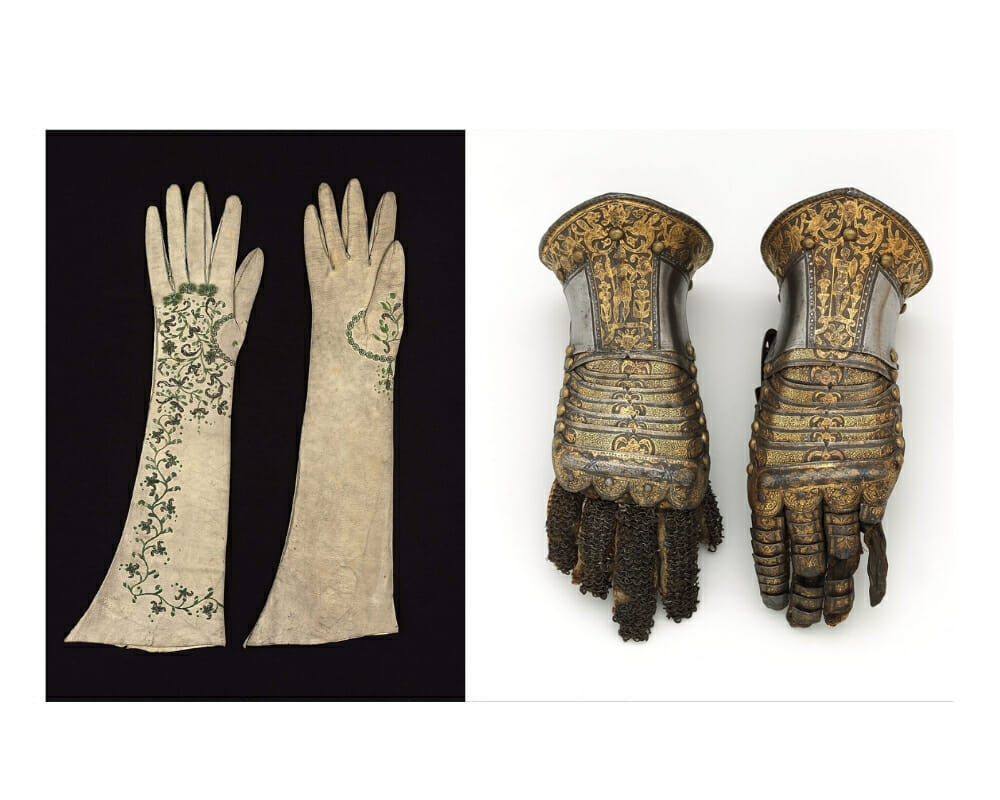 The history of gloves can be traced back thousands of years with some of the earliest recorded examples being attributed to the Egyptian pharaohs.

Often a sign of extreme wealth they are routinely found in the tombs of royalty and high ranking members of churches such as bishops and popes.

From the tomb of Tutankhamen remains of gloves were found that were decorated with a plaited, scale-motif design to later Kings and noble men that were often buried or interned into lavish tombs many of which would have had white silk gloves adorned with pearls, precious metals and gem stones.

Although most people today would view the glove as nothing more than a covering to keep the hands warm in winter or protected whilst working, gloves throughout history have played a much more meaningful role than a mere protective layer for the hands.

For centuries fashion gloves were worn a part of the highly intricate and deliberate costumes worn by high ranking officials, members of church, royalty and members of royal courts.

By the time of the fourteenth century gloves had become and almost essential item for all members of polite society and for even for the majority of the lower classes.

Although at a first glance at any historical painting were the patrons are wearing gloves they may seem like nothing more than a fashion statement of accessory, gloves have one of the most significant histories of all garments.

In many ways gloves were worn in a particular fashion or at a specific moment as a symbolic gesture and failing to do so could be seen as an insult to ones hosts(specifically in high society).

They were often used to deliberately represent and communicate a person’s faith, loyalty, trust, amity, love, honor, hostility and defiance towards others.

Gloves can be separated into two distinct categories: fashion gloves and work gloves used by those involved in outdoor labor.

Men wore gloves to protect their hands while in battle or hunting but also as a display of wealth.

Why Did Women Wear Gloves?

Women wore gloves as a protection from disease and to keep their hands soft and feminine.

Soft hands were a sign that a women came from a prosperous or upper class family and gloves were the number one way to keep the hands soft and protected while out horse riding.

Long gloves allowed women to hide the skin on their arms if they had a sort sleeve on their top which enabled them to cover up and maintain their modesty.

For those women that did have coarse hands from manual work, gloves were a way to hide their hands especially when at church or other social gatherings, effectively allowing them to hide their station in life.

When Were Gloves Invented?

Gloves were invented as far back as ancient Egypt, they had no thumb or finger holes but looked more like a pocket, they were used to protect the hands of noble women and were also used as a status symbol by the Pharaohs.

The pocket like glove then evolved into what we would consider a mitten(with a thumb hole.)

Gloves with fingers mage from silk were later used as a status symbol of the rich and powerful.

They were used to protect hands and keep them soft and were also used when eating to stop the hands from getting dirty.

Gloves made from leather have been around for centuries and they range from heavy gloves for those that needed protection whilst working such as farm hands laborers and those who trained hawks to the more expensive types aimed at the upper classes.

The upper classes would have used leather gloves when on horse back and also as fashion statements, these gloves would have been made from significantly finer leather, had very intricate stitching and would have used colored threads often from expensive silk or even gold thread.

From roughly the 1400s on the demand for leather gloves was growing considerably and for the upper classes that meant much soft types of animal skins were to be used as their gloves were not intended for any kind of physical work.

Lamb, sheep, doe, calf, hare, and chicken were in demand by the upper echelons of society and even dog skin as they were much softer and thinner than cow leather.

Between 1500 and 1700 rich women would wear gloves at night to help keep their gloves soft and supple(coarse hands were seen as a sign that you were involved in manual work) these gloves were extremely thin and commonly made from chicken skin or for the extremely rich the paper thin skin of unborn calves.

From roughly 1500 on as more and more fabric types were available to the rich and powerful the focus from leather based gloves shifted to softer much more stylish fabric based gloves such as silk, satin, velvet, cotton, and linen.

These materials were much softer and could be crafted much easier than leather, leather still played a role but the height of fashion at the time would have been super expensive silk and other imported fabrics.

Through to the 1600s more and more knitted gloves made from cotton and thread started to appear and the cost began to be reduced so that more ordinary folk could afford more and more stylish glove designs.

The 1800s saw satin become popular and then on to the 1950s were nylon and more modern fabrics such as vinyl and fake leather began to make mass produced gloves even cheaper.

There have been many styles of gloves throughout recorded history from the more practical hard leather work gloves used by those involved in laboring outside to the purely high fashion examples of the rich and powerful often adorned with expensive gem stones and gold thread.

Short glove would generally have been considered for use during the daytime or when wearing long sleeves.

They were often heavily embroidered or had lots of jewelry added to them as due to their short length they did not give much opportunity to add to the wearers outfit.

Long gloves first started to appear as a fashion statement in the 1700s as short sleeves became fashionable in ladies fashion.

The longer glove still allowed those to partake in the short sleeve style whilst still retaining a level of modesty as they could cover up the skin on their arm.

Long suede glove were very fashionable during the 1800s through to the 1900s especially when socializing during the day.

The finger-less style of glove was born out of practicality rather than fashion as it enabled the wearer to still have full dexterous control of the fingers which allowed them to keep their hands warm in the winter when stitching for example.

However, they also gave rich people and opportunity to display their expensive and flashy rings, these gloves were often made from expensive materials such as silk or velvet.

Gauntlets would generally be associated with knights and other fighting men as they offered a layer of protection not only to the hands but also added a protective layer between the glove and the armor of the arm.

The gauntlet was designed to add a foundation of defensive covering which consisted of overlapping pieces of serrated leather that covered the back of the hand like a shield, and their exterior would sometimes be coated with scales or other forms of pieces of plate such as horn or whalebone and often with spikes on the knuckles.